Texas Schools, Critical Race Theory, and Senate Bill 3 -- Showing the "Pores In the Face Of Life"

“Fox News has mentioned “critical race theory” 1,300 times in less than four months. Why? Because critical race theory (CRT) has become a new boogie man for people unwilling to acknowledge our country’s racist history and how it impacts the present.

“To understand why CRT has become such a flash point in the culture, it is important to understand what it is and what it is not. Opponents fear that CRT admonishes all white people for being oppressors while classifying all Black people as hopelessly oppressed victims. These fears have spurred school boards and state legislatures from Tennessee to Idaho to ban teachings about racism in classrooms. However, there is a fundamental problem: these narratives about CRT are gross exaggerations of the theoretical framework. The broad brush that is being applied to CRT is puzzling to academics, including some of the scholars who coined and advanced the framework.”

In Texas, Governor Greg Abbott signed into law a bill from this year’s regular legislative session that restricts how current events and America’s history of racism can be taught in Texas schools. It’s been commonly referred to as the “critical race theory” bill, though the term “critical race theory” never appears in it. An updated version that will go into effect in December, Texas Senate Bill 3.

SB 3, filed by state Sen. Bryan Hughes, strips out most mentions of women and people of color in that section – more than two dozen requirements that include Native American history, work by civil rights activists Cesar Chavez and Dolores Huerta, historical documents related to the Chicano movement and women’s suffrage, and writings by Martin Luther King Jr., Susan B. Anthony and Frederick Douglass.

It also removes the requirement to teach “the history of white supremacy, including but not limited to the institution of slavery, the eugenics movement, and the Ku Klux Klan, and the ways in which it is morally wrong.”

A top administrator with the Carroll Independent School District in Southlake advised teachers last week that if they have a book about the Holocaust in their classroom, they should also offer students access to a book from an “opposing” perspective, according to an audio recording obtained by NBC News.

Gina Peddy, the Carroll school district’s executive director of curriculum and instruction, made the comment Friday afternoon during a training session on which books teachers can have in classroom libraries. The training came four days after the Carroll school board, responding to a parent’s complaint, voted to reprimand a fourth grade teacher who had kept an anti-racism book in her classroom.

A Carroll staff member secretly recorded the Friday training and shared the audio with NBC News.

“Just try to remember the concepts of [House Bill] 3979,” Peddy said in the recording, referring to a new Texas law that requires teachers to present multiple perspectives when discussing “widely debated and currently controversial” issues. “And make sure that if you have a book on the Holocaust,” Peddy continued, “that you have one that has an opposing, that has other perspectives.”

“How do you oppose the Holocaust?” one teacher said in response.

Another teacher wondered aloud if she would have to pull down “Number the Stars” by Lois Lowry, or other historical novels that tell the story of the Holocaust from the perspective of victims. It’s not clear if Peddy heard the question in the commotion or if she answered.

Peddy did not respond to messages requesting comment. In a written response to a question about Peddy’s remarks, Carroll spokeswoman Karen Fitzgerald said the district is trying to help teachers comply with the new state law.

“Six Carroll teachers – including four who were in the room to hear Peddy’s remarks — spoke to NBC News on the condition of anonymity, worried that they would be punished for discussing their concerns publicly. They said district leaders have sent mixed messages about which books are appropriate in classrooms and what actions they should be taking.

“The debate in Southlake over which books should be allowed in schools is part of a broader national movement led by parents opposed to lessons on racism, history and LGBTQ issues that some conservatives have falsely branded as critical race theory. A group of Southlake parents has been fighting for more than a year to block new diversity and inclusion programs at Carroll, one of the top-ranked school districts in Texas.”

"So now do you see why books are hated and feared? They show the pores in the face of life. The comfortable people want only wax moon faces, poreless, hairless, expressionless."

The Hypocrisy of the Texas Law

How does the statute define “widely debated and currently controversial issue of public policy or social affairs”? It’s also unclear how any presumed violations will be proven or punished. How absurd is that the the law may require teachers to provide opposing views on matters of “good and evil” like the Holocaust or to get rid of books that offer only one perspective of such historical content?

Some lawmakers say this is not the purpose of SB 3, however …

Late last year, a Carroll parent complained when her daughter brought home a copy of This Book Is Anti-Racist by Tiffany Jewell from her fourth grade teacher’s class library. The mother also complained about how the teacher responded to her concerns.

Descriptions of the content of the book include “Gain a deeper understanding of your anti-racist self as you progress through 20 chapters that spark introspection, reveal the origins of racism that we are still experiencing, and give you the courage and power to undo it.”

Carroll administrators investigated and decided against disciplining the teacher. But last week, on October 4, the Carroll school board voted 3-2 to overturn the district’s decision and formally reprimanded the teacher, setting off unease among Carroll teachers who said they fear the board won’t protect them if a parent complains about a book in their class.

In the wake of the action by the board, a high school English teacher at Carroll said that it would take her months to review every book in her classroom and that based on the guidelines, she would most likely need to get rid of many of them. She said she no longer feels safe keeping a copy of The Hate U Give by Angie Thomas, in part because it depicts racialized reactions to a police shooting, or any books by Nobel Prize-winning author Toni Morrison.

“One of the questions we’re supposed to ask is ‘Does the writer have a neutral stance on the topic?’” the teacher said. “Well, if you are Toni Morrison, how can you have a neutral stance toward racism? Now history is being depicted through this rose-colored lens, and all of this is creating a chilling effect that’s going to hurt our students.”

“Colored people don’t like Little Black Sambo. Burn it. White people don’t feel good about Uncle Tom’s Cabin. Burn it. Someone’s written a book on tobacco and cancer of the lungs? The cigarette people are weeping? Burn the book.”

What the Bill Is Really About

Although critical race theory has been around since the seventies, it burst into the vernacular when Donald Trump issued an executive order censuring discussion of topics related to race in federal diversity seminars provided by contractors. Since then, many white nationalists use it as a rallying cry to “make America great again.”

The approach of some Republican-led state legislatures is a method for continuing to roll back racial progress regarding everything from voting rights to police reform.

The critical race theory bill in Texas is part of the extreme right’s backlash as a result of the 2020 uprising against systemic white racism during the George Floyd and Brionna Taylor protests and marches. These protests left an indelible mark on the country and forever changed the consciousness of people in the United States. This “critical race theory” bill is an attempt by the extreme right and neo-Confederate forces to keep America in the past.

The bill also attempts to ban teachers from giving students assignments or credit for community activism against racism or injustice. This is an effort to stop the multiracial working class from empowering themselves and making change.

Providing the next generations with a true history of oppression and exploitation in the United States and the world is a difficult task. That task includes allowing questioning about trusted institutions and providing historical viewpoints that some consider “currently controversial.” Encouraging critical thinking is not teaching critical race theory. Instead, it emboldens students to do something to fix the problems in the world.

Seeking the truth is paramount in providing an education based on equality and justice. Teachers believe America is capable of making positive changes and rewarding natural rights over the tyrannical tendencies of man and government. Overstepping the bounds of censorship and controlling thought are attempts to win a culture war by the right.

To close, these Texas lawmakers have “weaponized” critical race theory to stifle conversations about race and other issues conservatives deem “diverse and contending.” Just read this report from Texas Monthly to see how close-minded individuals can react when fighting this culture war:

“Before she even reached the podium to deliver remarks at the Conroe Independent School District board meeting in late July, Ginger Russell began to talk. The small-business owner and mother of two had only three minutes allotted to discuss 'critical race theory.' She had spent much of the previous few months attending school board meetings across Montgomery County, north of Houston, decrying the academic framework that examines the ways in which legal, social, and cultural systems can perpetuate racial discrimination.

“After a brief detour from her notes to dress down an earlier citizen speaker who had sought public support for queer students, Russell got back on task.

“First, she called the school board president, Stephen 'Skeeter' Hubert, a liar. He had said earlier that night, to raucous applause, that the school district doesn’t teach critical race theory.

“Then Russell launched into a diatribe slamming Conroe ISD’s diversity, equity, and inclusion policies, which she said were a Marxist ploy to prioritize skin color over merit when hiring educators for the district. Throughout her speech, she failed to mention that nothing the ISD did would affect her children. They have already graduated from high school. What’s more, they haven’t attended a Montgomery County school for more than a decade, as Russell homeschooled them during that period.

“Russell was not alone in her crusade that night. Conroe ISD is the tenth-largest school district in the state, with more than 65,000 students. Roughly a hundred parents and other community members, about three times the normal turnout, packed the board meeting. Though the official agenda included examination of standardized test scores, COVID precautions, and the supply of toner and inkjet cartridges, Russell and a handful of other activists quickly turned the meeting into a referendum on critical race theory.

“During the public comment period, Jon Bouché, who ran a competitive but losing campaign to chair the county GOP, called for the ISD to 'defy the woke mob.'

Another father called for it to 'root out' teachers promoting critical race theory. A young pastor cited the Bible to condemn the 'nonsense baloney' of critical race theory and to forbid the board members from having educators teach it to his kids …

“One parent even garnered applause after suggesting the ISD install security cameras with audio in classrooms to monitor whether educators were sticking to the script.” 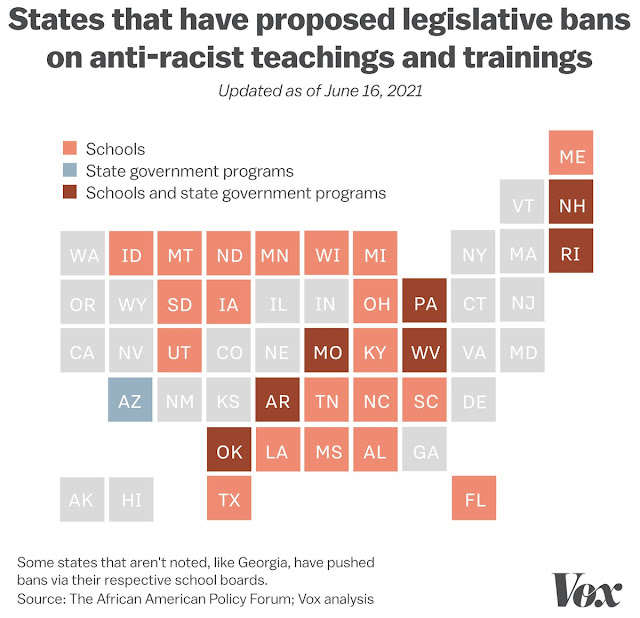 Posted by Frank Thompson at 8:19 AM